So you are thinking of moving to Chattanooga, TN and are new to the area. Keep a few things in mind as you explore and research the Choo Choo city and what it is like to live here.

1. Region: The influence of media encompasses Cleveland, TN to the north, and Dalton, GA to the south. We are on the border with Georgia. Georgia has a state income tax, but has generally lower property tax and sales tax. You reach roughly 500,000 people quickly when you add up the surrounding counties in both states. The entire region is hilly and green. People moving here from Texas are excited to see all the trees. Like Davy Crockett says, “Greenest state in the land of the free.” 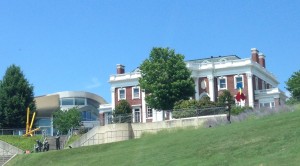 2. Weather: We have a humid, warm climate. People that move here from Western US are welcomed with a large dose of liquified air. Southeastern Tennessee is blessed with lots of water, vegetation, and critters. We may get one to three snow events during the winter, but generally we have mild winters compared to our Northern neighbors. Word of caution here: Folks who have lived up North most of their lives are shocked when the city is shut down from ice and and sleet. The municipalities do a good job of keeping us safe, but we do not have lots of equipment for large snow events. We also live in hilly terrain, and regardless of your snow driving skills, there is no controlling your vehicle on an icy steep road.

3. Government: Hamilton County, TN has a government with a leader Mayor, and the city of Chattanooga has it’s own Mayor. We do not have a central unified Metro government. This makes for exciting politics and power struggles. Hamilton County is also home to several smaller cities (some with their own property tax and services). The cities are Apison, Bakewell, Birchwood, Chattanooga, Collegedale, East Brainerd, East Ridge, Fairmount, Falling Water, Georgetown, Harrison, Hixson, Lakesite, Lookout Mountain, Lupton City, Middle Valley, Ooltewah, Red Bank, Ridgeside, Sale Creek, Signal Mountain, Soddy-Daisy, and Walden. Hamilton County is adjacent to 10 other counties. We are a quilt work of townships that have their own unique flavor and character. They also have different tax structures and services.

4. Education: Hamilton County has nearly 30% of its K-12 students attending private schools. My judgement on this relatively high percentage is that the private schools are very good and provide stiff competition to the public schools. There are several excellent private boarding high schools in Chattanooga. Ted Turner attended McCallie, a school for boys only.

5. Industry: Chattanooga, a river town, has always been a transportation hub. It has a manufacturing past history. When I was a child in the 70’s I can remember being sleepy and in the back seat (returning from vacation) but knowing distinctly the “smell” of being home. Chattanooga has transitioned well through the decades. We are a hub of insurance, (Blue Cross/Blue Shield of Tennessee, Unum), sugar/food (Little Debbie, Coca Cola, Moon Pie, Double Cola), Manufacturing and Assembly (Volkswagen, Alstom, Komatsu, Wacker).

6. Topography: Time is relative to speed, distance, roads and elevation. When someone from Kansas or Florida looks at a map, they could easily think that the distance between two points, given a paved road means similar travel times. But, even a bird is challenged with obstacles of height, we affectionately call mountains and ridges. A Rocky Mountain native hardly thinks of the Appalachians as “real” mountains, but trust me, your car brake pads know. You also quickly learn that there is a small neat grid of square blocks in a tight space known as our business district downtown. But once you venture a few short blocks, the roads follow mother nature’s conventions of ridges, streams and ditches. Consider commute time traffic patterns in this context. (Example: There is “north of the Tennessee River” and getting to the south or eastern part of the county means you cross one of five major bridges.)

7. Homes: When people move here from Northern states, they frequently ask for all brick homes with basements. Our water table, rock, and soils do not lend digging out a “traditional” basement. There are plenty of basement homes in the area, and they generally come with a sloping lot. Of course many lots in our area are sloping. So if you are from a flatter part of the world, read with caution the seller’s notion of a “level” lot. “Chattanooga level” is different than “Florida level”. Our builders mostly build on crawl spaces because we have a history of elevating our homes above termites and water flow.

Another article I wrote about more general things to think about as a buyer of real property.

Chattanooga is absolutely wonderful, eclectic and beautiful. We have the culture of a symphony, to the mountain opry bluegrass. Museums, aquariums, outdoor water sports, rock climbing, civil war parks, and caves. From Gig City to grabbling. From gnomes to alien homes, Chattanooga has something for you. If you don’t believe it, take your shoes off and sit a spell. People have a tendency to move here and stay. Move to Chattanooga and buy a home or two, you’ll be glad you did.